Scotland and its 21st Century Zoos

Chris West, Iain Valentine and Douglas Richardson hold three of the top positions within the Royal Zoological Society of Scotland. Each a dedicated conservationist and expert in their field, they will be asking – what does and should a 21st century zoo look like? what place do zoos have in the world today? and what is the future of zoos and conservation? . 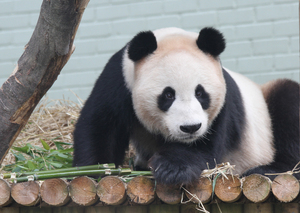 Good zoos act as an insurance policy for species dying out or being driven to extinction. Illegal trade in animal products, habitat destruction, global warming and introductions of non-native species have all had a disastrous effect on many animals. The Royal Zoological Society of Scotland provides safe places, at Edinburgh Zoo and the Highland Wildlife Park, whilst habitats are restored and undertake captive breeding programmes to help restore populations of threatened species.

Outside of the parks, the RZSS educates, trains and provides support to local communities so they can learn to live alongside and support endangered species. It applies scientific expertise to the reintroduction and restoration of wildlife through the projects supported in the UK and abroad. It can be a slow process though and so the need for zoos to act as conservation centres continues.